The Rally kicked off in Pattaya on August 7th and finished up at Phrae on Wednesday August 11th, after covering over 2010km of jungles, swamps and river crossings. The Isuzu D-MAX finished first in the Prologue prior to the start of the event & despite dropping back as far as eighth the crew still managed to claw their way back into second even after becoming sub-merged in a lake on Day 2 of the Rally. "We had to drive through the lake to find the road and it was so deep the water was coming through the windows. Our mobile phones and cameras were under the seat and they just got drowned. In fact, Harry thought he was going to drown - the water was up to the dashboard" explained Bruce.

The Isuzu Motorsports Crew had to wait for a recovery vehicle to pull them out and then dry the car out as much as they could before they could continue. They thought they were out of the running but because the afternoon session was even harder, with no-one else getting through, they moved up the order again.

Day 3 was a 470km stage, with a massive 220km of transport on top of the competitive stage, which was 250km long, through jungles, swamps & rivers.

Day 4 halted the crew near the end of the stage when they came across a farmer who was bogged. They couldn't get around him because of the jungle & rice fields surrounding the track. So the remaining competitors pitched in to help pull the farmer out and officials then had to recalculate the times.

The Isuzu D-MAX is running an Xtreme Outback Clutch Kit  (Part No. KIZ28006DSBHD) which has been specifically designed to handle the rigors & conditions of Rally. 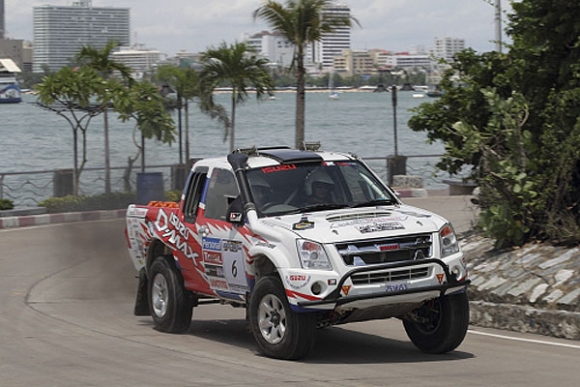