Australian Clutch Services already announced that they will be displaying their products at the Automechanika trade show that will be held in Frankfurt (Germany) from the 16th until the 20th of September 2014.

Considered as one of the largest and most significant trade fair for the Automotive Industry and a not-to-be-missed event for many Australian distributors & manufacturers. This year again, ACS will be part of the Australian Pavilion, organised by AAAA.

2 years ago, Australian Clutch Services surprised with an interactive and innovative display that included a life-sized automated crocodile. The stand (pictured) attracted a lot of attention from the show’s visitors, who were eager to have their picture taken with George The Croc.

“With hundreds of manufacturers displaying at the show, it is important for us to stand out from the crowd and we’re constantly trying to come up with new ideas and offer a bigger and better stand every time.” Says Mr.Jordan
Part of the stand’s set-up has already been revealed, as Australian Clutch Services announced that they will have not less than 3 brands on display: Xtreme Clutch (Street Performance and Racing range of products), Xtreme Outback (clutch upgrades for 4WD applications) and ClutchPro (OEM quality clutch solutions).


After opening a warehouse in Poland two years ago, ACS saw the popularity of two of their brands (Xtreme Clutch & Xtreme Outback) grow rapidly in Europe. The staff at ACS looks forward to see their increasing network of European distributors and also meet potential new business partners. 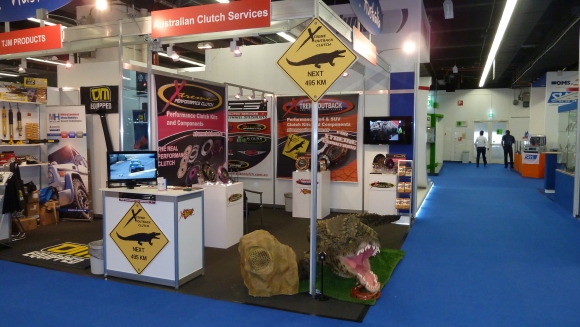